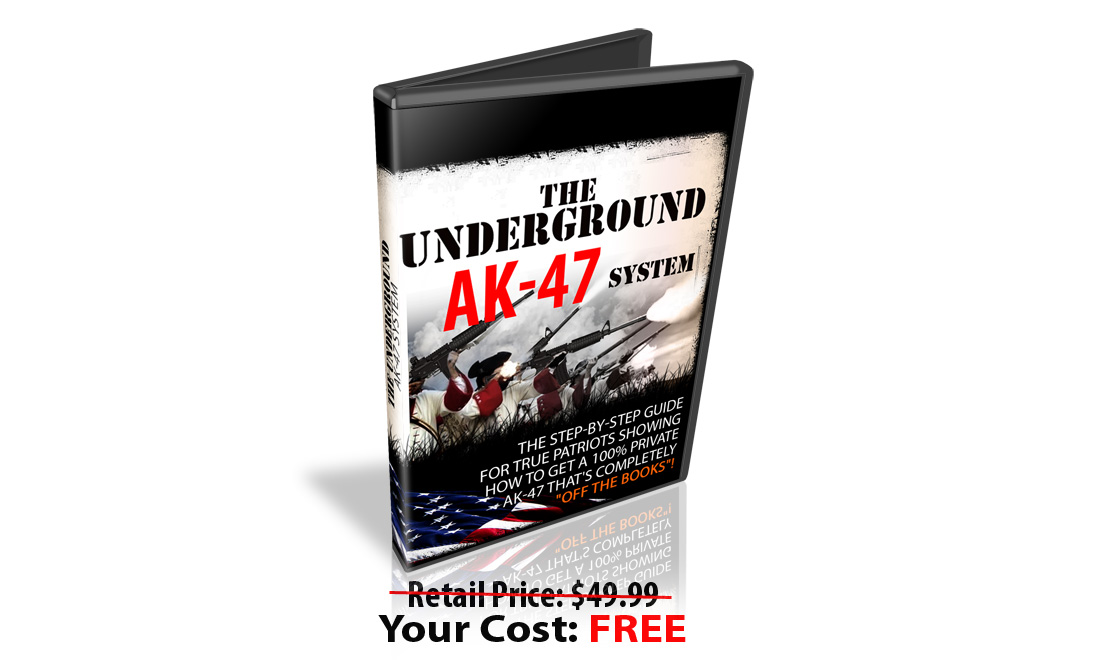 Yes, You Can Build Your Own AK-47 “Ghost Gun” Just Like Mine And The Government Will Never Know About It!

Don’t Wait! Build your own AK-47 NOW, while you still can …Trump is good news for gun rights, but you never know what could happen behind his back…
Now that the anti-gun Democrats have won control over the house – their very FIRST order of business is to try and ban guns like this AK-47 (again!)

FACT: The AK-47 is the most popular firearm in the world …

The AK-47 was developed by Mikhail Kalashnikov and officially adopted by the Soviets in 1949.
During the Cold War, the Soviets not only raced against the West in a nuclear war, but they spread the AK-47 far and wide throughout Eastern Bloc countries …
The reliability of the weapon became legendary. It was so simple to operate, untrained guerilla fighters could use it easily. It was also cheap to produce, so other countries copied the minimalist design.
Ultimately, because of the success of the AK-47 being used by guerrilla fighters in Vietnam, the United States military had to develop and adopt the M16 rifle in the 1960’s.
And even today, after over 70 years, the AK-47 is still one of the most popular fighting rifles in the world.
In fact, the World Bank estimates out of the 500 million firearms in the world, 100 million of them – a full one fifth – are some variation of the AK-style design.FACT: The AK-47 fires a larger bullet than the AR-15 (and it’s a lot cheaper too!)

As you may know—despite what the anti-gun media says—the AR-15 is NOT a high powered rifle.
In fact, in many states like my home state of Virginia – they won’t even let you hunt deer with a regular AR-15 chambered in 5.56 NATO because it’s considered too weak to be a hunting rifle!
But, the original AK-47 design rifle fires a 7.62x39mm, which is considered to be in the .30 caliber class of cartridges…
That’s plenty big enough to hunt deer and other medium game.
Plus, because the AK-47 is one of the world’s most popular rifles, you can almost always find surplus 7.62×39 ammo CHEAP.
In fact, many preppers prefer 7.62x39mm because it’s typically 9 to 10 cents cheaper per round than AR-15 ammo!
That said, in recent decades, the Soviets have been using the AK-74 chambered in 5.45x39mm which is more similar to the AR-15. (And you can certainly build your own AK-74 using this same DVD too!)

The truth is, the AK-47 is a simple design…
In fact, people who live in third-world countries regularly build AK’s with hand tools because the AK-47 design is drop-dead simple to produce with the minimum investment of time, energy and money.
You may even have heard that many of these guys build AK-47’s in caves!
While that may or may not be true, the truth is that you can build an AK-47 with very little resources…
In many countries, the armies are full of uneducated soldiers who are issued the AK-47 because the rifle is reliable, it always works, and it’s so simple to use.
The bottom line is: If barely educated and poorly equipped gunsmiths, living in third world conditions, can produce these rifles with simple hand tools — you can easily do it in your garage or workshop.

FACT: The AK-47 Is World-Renowned For Being Rugged, Reliable and Hard To Jam

Among preppers, the AK-47 has an almost “legendary” status as being the most reliable and rugged rifle in the world.
Most people say that the AK-47 almost never jams and is more reliable than any other semi-automatic rifle in existence.
The fact is that the AK-47 is extremely reliable and is known to function even when covered in sand, mud, underwater, and even abused by the elements and covered in rust.
The fact is that the AK-47 — along with the AR-15 — are the two most popular rifles in the world for a good reason. They both work. They’re both reliable. And they’re both perfect for defending freedom!