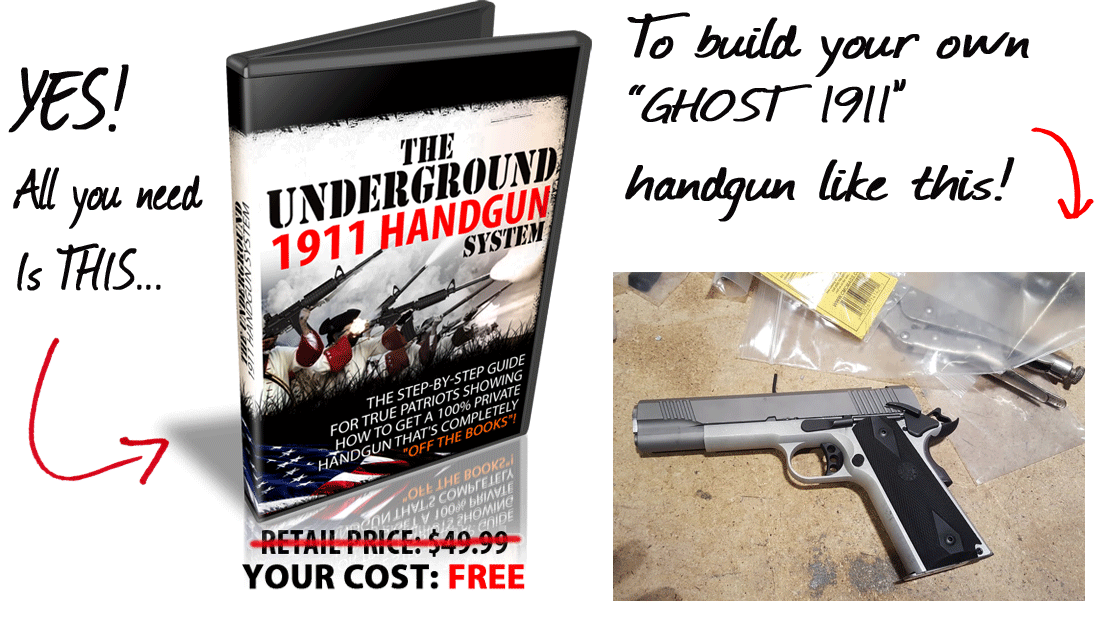 Now you can build this untraceable 1911 handgun yourself, at home, with simple hand tools!

If you would like to know how to build the most famous handgun in the world — the 1911 style pistol — at home, completely “off the books”. Meaning …

… with just a handful of tools and simple, inexpensive parts in your basement — then you NEED The “Underground 1911 Handgun” DVD!

Trump was elected because many believe he is pro-gun, but he has flip-flopped multiple times already. And you never know what could happen behind his back because thousands of local, state and federal officials want to ban guns.
Now is the time for you to get the information you need to ensure that you can defend yourself and your family no matter what the future brings…

When you follow the “Underground 1911 Handgun” DVD training program you’ll be able to build your own 1911-style .45 ACP handgun using nothing more than a few common tools.
No expensive milling machines, no 3D printers. All you’ll need is the DVD, a drill or drill press, some common hand tools, and you can build your own untraceable 1911 handgun at home and nobody will ever know about it.No Serial Number. No Registration. 100% Legal.

Simplicity is the secret here.
In this simple, no-nonsense, DVD you’ll discover every step and actually see how to build your very own .45 ACP 1911 handgun “off the books” because you’ll watch me build it in my own basement!
Just follow the steps to make your own, and it’s a LOT easier than you might think…

Yes, You Can Build Your Own 1911 .45 ACP Handgun Just Like Mine And The Government Will Never Know About It!

This is a picture of my personal 1911 .45 ACP handgun that I built with no serial number and no registration. It’s completely untraceable.